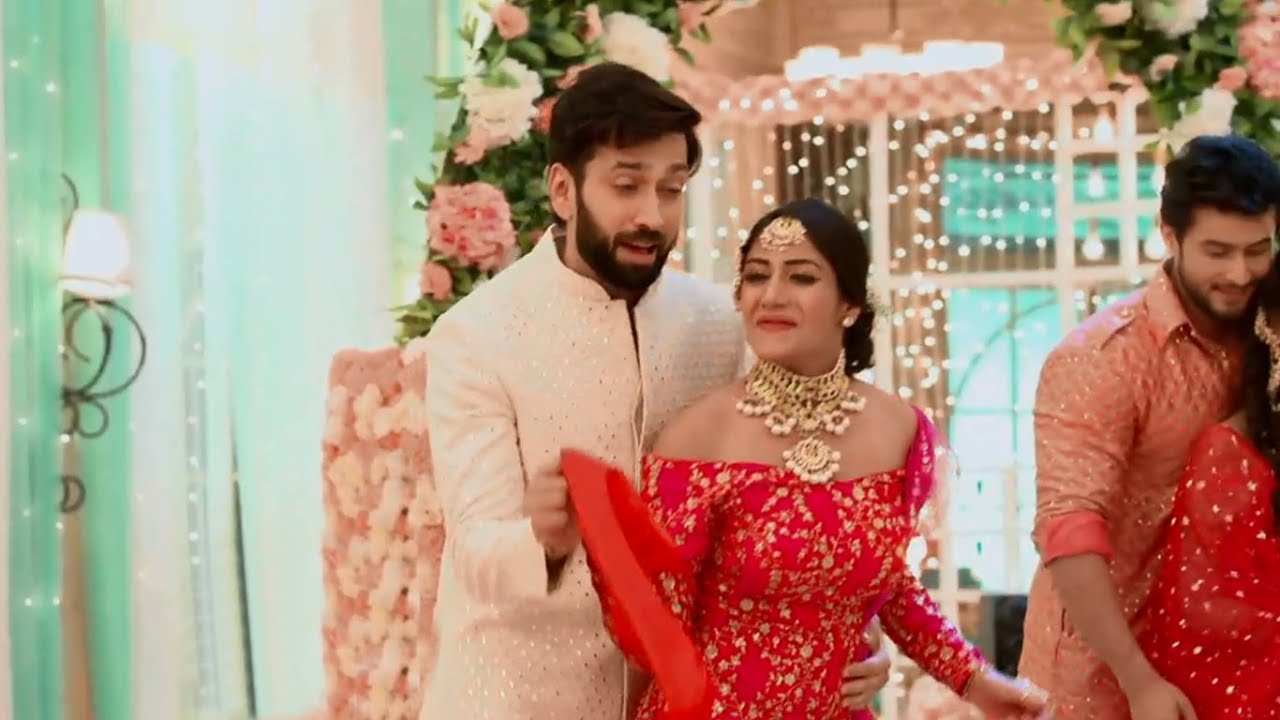 Game of Love Update 29 April 2021: Aditi brings a man there. She says this man was trying to run out. They see the man’s hands glowing. Shivaansh says it means he has opened the safe. Aditi says he is the intruder. Nani thanks Lord that real culprit is caught. He asks what are you doing here. Aditi says my team is with Sharda, commissioner told me to keep an eye on your house, I know you told me that I should not come in front of you, but if I agreed to you, I could have not done my duty well, anyway you all don’t need to be scared now, you can enjoy the function happily. She takes the man. Radhika asks where is Varun. Varun comes from outside and says I went to get the cake, its a big day for Shivani, I had to give her a surprise, why are you all upset, is everything alright. Radhika says come, I will tell you. Nani asks where is
Mannat. Shivani says she left.

Nani asks what can she do, she has self esteem, she is blamed all the time. Mannat comes and says food is ready. Nani says Shivaansh I think you should apologize to Mannat. He says I can’t say this.
He goes and hears Mannat talking on phone. She cries and asks Munni to take medicines and sleep. She says this too shall pass. Tere naam…plays…. Shivaansh gets food. Khanna asks for whom are you taking this. Shivaansh asks him to give the food to Mannat and also give a chocolate icecream. He says don’t tell her that I have sent this. Khanna takes food to Mannat. She says I m not hungry, but why did you get it. He says don’t vent Shivaansh’s anger on food, I got chocolate icecream too, have it. He keeps the tray and goes. She says I should not be angry on food. She eats the food. Aditi says you got saved, do you know what would have happened if I didn’t get that man there on time and applied solution on his hands, you would have not got time for running away, Shivaansh would have caught you and ousted Mannat as well. Varun looks on.

Mannat drops the icecream in Shivaansh’s branded shoes. She goes. Shivaansh tries the shoes and feels cold. He sees the icecream. She asks where did my icecream fall. He shouts and asks Khanna what’s this, who has put chocolate icecream in my shoes. Mannat worries. Khanna says I just kept shoes, I don’t know. Shivaansh says now I know it. Khanna removes his spoiled sock. Mannat runs. Varun says you didn’t do any favor, I got you on team to manage the work, Shivaansh is clever, he removed everything before I reached the safe, he won, I will not lose and get the will, but I want your help. Shivaansh comes and asks what help. Varun says I was telling her… Shivaansh says I don’t think you know her. She says he is giving me statement on your family’s behalf. Varun says I was asking her to ensure family safety. Shivaansh thanks her. She says I was doing my duty.

She goes. Shivaansh says I have made a new will, life has no guarantee, its in Nani’s room safe. Varun asks why. Shivaansh says I want to keep Radhika protected. Varun asks are you okay, what’s going to happen to you. Shivaansh says nothing, Radhika is innocent, I know you will keep her happy. Varun thinks what did you do for her. Shivaansh says my new will…. Khanna comes and says Nani is calling you. Varun says you were saying something. Shivaansh says I will meet Nani and come. Varun says I want that safe at any cost. Shivaansh keeps all assets in safe and locks it. He says I gave the responsibility of this room’s security to Aditi, this is not just a safe, but my sisters’ future, I don’t have much time, Varun is there for Radhika, I won’t have any regret when Shivani marries Angad. Khanna says the function will be amazing today, don’t worry. They hug. Nani checks arrangements. Mannat says I m fixing flowers on gift boxes, don’t worry, I will do everything. Shivaansh asks Khanna to go and see if Aditi needs help.
Mannat smiles seeing Shivaansh. Servant keeps a white cloth there. Mannat holds the fevicol bottle. The glue falls over the cloth. Shivaansh comes to her and asks why are you standing as statue.

She says I was dreaming. He asks can I get a simple answer, stop, go and check the flowers. She goes. He says I will check gifts. He gets seated on the cloth. Mannat stops the servants and checks the flowers. She doesn’t see under the basket. Aditi stops her from checking. Shivaansh asks servants to do work well. They smile seeing him. Shivaansh asks what are you looking at, didn’t you see a superstar before, do your work. Nani and everyone come, and smile seeing the cloth stuck to him. Shivaansh says I want everything to be cool and classy like me, I m so perfect, so I have such reach in the world. Nani jokes on the tail. Mannat says I was just checking the basket. Aditi says I m here for checking, the security is my concern, you go and do your work.

Mannat sees the cloth and says Shivaansh is looking like a peacock. She tries to tell Shivaansh. He argues and asks her to stay away. Nani says I wasn’t getting words. Shivaansh says no more talking and goes. They all laugh. Mannat says sorry and tells how it happened. Nani asks again. Mannat says this happens with me. She goes after Shivaansh. Aditi asks did you get that girl to make our work easy or to spoil it. Varun asks her not to worry. Aditi says I could have done this work too. He asks did you do your work, you couldn’t go close to Shivaansh and win his trust, lets concentrate on our work. He checks the safe and says we can’t open this locker, but we can take this out, we have to do this, so that I reach Shivaansh’s will.
Mannat stops Shivaansh. She shows the cloth. He asks can’t you pick the cloth. She says its not mine. He sees the cloth stuck to him. She calls him peacock Singh Oberoi. He tries to remove it and gets tangled with Mannat inside that cloth. Tanha sa kuch……plays…. They get rid of cloth. He says you are a walking disaster, stay away from me, 5 feet away, its my sister’s marriage function, there shouldn’t be any problem. She says sure. She goes upstairs and sees a wife fixed on stairs. Aditi asks what are you finding. Mannat says I was seeing it, this wire…. Aditi says we are installing security alarms. Mannat says it doesn’t look electrical wires.

Shivaansh comes and asks what’s happening here. Aditi says Mannat is teaching me my work. Shivaansh says she doesn’t know doing her work. He asks Mannat to not interfere and focus on her work. He says I m sure Aditi will do everything for this house and family’s safety. Mannat tries to say. He asks her to be silent. He goes. Mannat goes downstairs. Angad’s family comes in the function. Nani welcomes them. Bua says who knows function will happen or not, I m doubtful that this alliance won’t be formed. Nani worries. Shivaansh sends Nani. He greets Bua. Bua asks how are you now. He says fine. She says you are lying, why did you faint suddenly yesterday, why did you take these medicines, I found out and got to know that you have a heart disease, you have hidden this thing from entire family, I heard that even Shivaye also had this disease, its a genetic problem, it can happen with Shivani too, I can’t make her my bahu. Shivaansh laughs and says never, its not true, my heartbeat is in my control, come for rasam. Bua asks are you fine. She gets a diya and says you are fine, you won’t have any problem with this smoke. He thinks come on, I can’t look uncomfortable to Bua. He tries to control his discomfort and then blows off the diya. He says look at me, nothing happened to me, I had allergy to smoke yesterday, I have medicines, and see its my prescription, anyone can have this allergy because of weather change. She goes. He thinks Khanna had warned me before. He drinks water. Varun comes and asks what was Bua asking, you are fine, right? Shivaansh says yes, lets start the rasam. He goes.

Aditi says I have set everything, now you have to manage. Varun signs her and fakes bride’s disguise. He goes upstairs. Mannat says such a good lahenga and strange shoes, bad fashion sense, but that means men’s shoes. She calls him out to stop. The women turn to her. Varun stops. Mannat tries to ask. Aditi comes to interrupt and asks the women to go. Mannat says but functions are downstairs. Aditi calls Shivaansh and complains again. Shivaansh asks Mannat not to interfere. Mannat says a woman was looking strange. He asks her to go fast. He says sorry for that. Aditi thanks him. Shivaansh and Dhruv get a floral chunri and surround Shivani and Angad by it. Everyone claps. Nani signs Mannat. Shivaansh holds Mannat’s hand. He takes the garland from her hand. Mannat and Shivaansh wear Shivani and Angad wear garlands. Mannat hears some sound. Varun drills the safe door. Mannat thinks to go and check. Aditi helps Varun. Varun says now we will take this safe out. Mannat thinks this sound is coming from Nani’s room. She tries to get in. Varun worries. Shivaansh and everyone clicks pics. The safe is lifted and taken away.

Mannat enters and gets shocked seeing safe gone. She goes and says safe is missing from Nani’s room. Sivaansh and everyone rush to see. They see the safe at its place. Shivaansh asks what’s this joke.Shivaansh says this girl said safe is missing. Aditi asks what, how can this happen when I m guarding it, you can check, its here. Mannat says it wasn’t here. Nani says why will Mannat lie, lets check safe once. Bua asks what’s happening here, guests are here and a family drama is happening here, its the limit. Shivaansh says don’t worry, Shivani’s marriage is imp for us, Aditi is here to handle things, don’t stress. They all leave. Aditi asks Varun to come out. She says you got saved. He says don’t worry, major work is done, until they know safe is changed, we will get the real will papers. She asks him to take the safe and go.