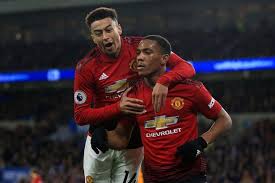 Advertisements
Loading...
Manchester United fans have something to worry about as Ole Gunnar Solskjaer has admitted there may be fitness concerns over three of his players ahead of Wednesday’s Emirates FA Cup replay with Wolves and the Premier League clash with Liverpool next weekend.
The Red Devils cruised to a comfortable 4-0 win over Norwich City at Old Trafford on Saturday with Marcus Rashford scoring a brace while Anthony Martial and Mason Greenwood rounded up the goalscoring. Solskjaer is now planning for the game against Wolves with a fourth-round date at Tranmere Rovers or Watford at stake in midweek.

According to the Manchester United boss, the fitness of star man Marcus Rashford, Luke Shaw and Ashley Young are in question as he does not know if they will be fit enough to play the FA Cup tie and the Premier League clash against Liverpool.
Rashford became the third-youngest player to reach 200 appearances for Manchester United but was withdrawn in the second half, despite being on a hat-trick. At the end of the game, Solskjaer spoke to MUTV in the tunnel and was asked if the England international will be available against Wolves:
“I don’t know. If he’s ready, and if I decide to play him, you’ll see. He’s played many games and I might have to look at it and see how we can manage him. But, we’ve got a week off very soon – in February.”
Also, according to Solskjaer, Luke Shaw was initially named on the bench but illness has limited his training and he felt his hamstring before kick-off, leading to Tahith Chong taking his place among the substitutes. “He didnt feel right,“ Ole told MUTV.” He’s been ill. So, for me, fine; go home. Hopefully, hell be ready for Wednesday.”
Ashley Young missed the Norwich game and, when quizzed on the reason for the absence, the boss told journalists: “He wasn’t fit to play.” Jesse Lingard was another absentee, due to illness, joining fellow midfielders Paul Pogba and Scott McTominay on the sidelines.
Manchester United would be hoping that they can get all their top players fit enough to get a result against Wolves in order to keep their fight for titles alive. The Red Devils have a mountain to climb in the Carabao Cup semi-final second leg and the FA Cup might be their last hope of a domestic trophy.
The Premier League top 4 is still within sight but a defeat to Liverpool at Anfield might make the task even harder than it normally would.