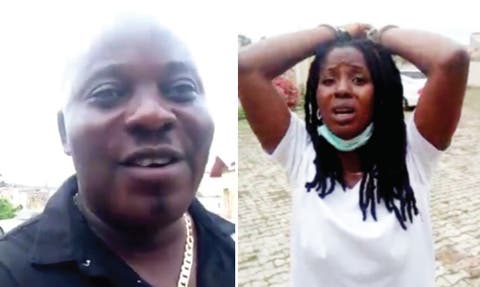 The Nigeria Police Force has confirmed the arrest of two policemen, SUPOL. Tijani Olatunji and Inspector Gboyega Oyeniyi, for allegedly subjecting a suspected robber’s girlfriend to dehumanising treatment at the man’s house in the Ibadan area of Oyo State.

The Force Public Relations Officer, Frank Mba, who confirmed the development in a statement on Thursday, said efforts were on to arrest another cop and a yet-to-be-identified civilian involved in the incident.

Mba, however, said the officers were on legitimate duties.

The police team had been on the trail of the robber, who was traced from Lagos to his abode in Ibadan, where he was arrested.

Mba’s girlfriend, who identified herself simply as Towobola, was also arrested.

One of the policemen, identified only as Wyclef, filmed himself interrogating Towobola and the suspect.

In the undated footage of the incident posted by one Olayinka Olaonipekun on Twitter, the alleged criminal said, “I was arrested at home. People should be patient, do the right thing and follow the law.”

The lady, while wailing and pleading with Wyclef that she was unaware of the suspect’s atrocities, said she only paid him a visit on the day of the arrest.

However, Wyclef and his colleagues, including one Gboyega, made sexist remarks against Towobola.

Wyclef in particular accused her of being a prostitute, as she pleaded her innocence. “Why did you leave your former boyfriend that you are having sex with to follow an armed robber?” he demanded.

She replied, “I don’t have a boyfriend. You can check my phone. I just finished serving as a corper and collected my NYSC discharge certificate few days ago.”

Wyclef further asked, “Why did you break up with the person that deflowered you?”

robber and kidnapper in Ibadan, Oyo state. . Apparently the officers had gone to the home of a suspected kidnapper and armed robber to arrest him and there they met the lady. . One of them decided to humiliate her by filming her as he asked her very dehumanizing questions like if she was a virgin and who she lost her virginity to. The officer went on to mock her that it is her greed that has landed her in trouble. He said if he was the one who approached her, she wouldn't have agreed to date him because he wasn't rich.

Suspect reveals why he raped his 9 year old daughter