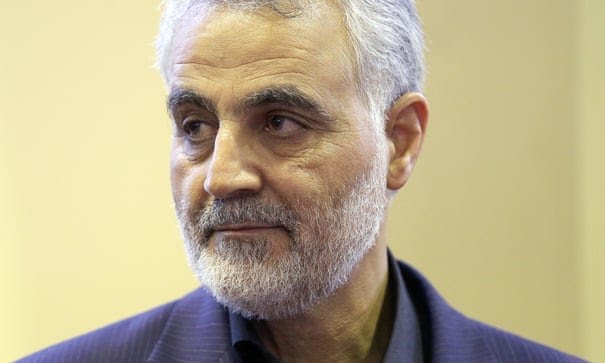 Donald Trump ordered an airstrike that killed Iran’s most powerful general in the early hours of Friday, in a dramatic escalation of an already bloody struggle between Washington and Tehran for influence across the region.

Qassem Suleimaniwas hit by the drone strike while local allies from the Popular Mobili sation Forces (PMF) drove him from Baghdad airport. The de facto leader of the PMF, Abu Mahdi al-Muhandis, a close Suleimani associate, was also killed in the attack.

“General Suleimani was actively developing plans to attack American diplomats and service members in Iraq and throughout the region,” a Pentagon statement said. “This strike was aimed at deterring future Iranian attack plans.”

Minutes before the announcement, Trump tweeted a US flag without comment. Later, the White House put out a statement saying the strike was a “decisive defensive action” carried out “at the direction of the president”.

The Iranian president, Hassan Rouhani, said in a statement: “Suleimani’s martyrdom will make Iran more decisive to resist America’s expansionism and to defend our Islamic values. With no doubt, Iran and other freedom-seeking countries in the region will take his revenge.”

fighting Daesh (ISIS), Al Nusrah, Al Qaeda et al – is extremely dangerous & a foolish escalation. The US bears responsibility for all consequences of its rogue adventurism.”

Tehran’s Lebanon-based ally Hezbollah also promised to avenge the killing. In Iraq, Hadi al-Ameri, a Iran ally and head of the paramilitary Badr Organization, called on all Iraqi factions to expel foreign troops.

No Iranian official detailed what type of retaliation was being planned or for when. Washington and its regional allies Israel and Saudi Arabia, who also see Tehran as an arch-foe, all braced for potential reprisals.

The US Democratic presidential candidate Joe Biden, said Trump had “tossed a stick of dynamite into a tinderbox”. His fellow Democratic hopefuls Elizabeth Warren and Bernie Sanders warned the attack could spark a disastrous new war in the Middle East.

Suleimani was commander of the Quds force, the elite, external wing of Iran’s Revolutionary Guards, which the Trump administration designated a terrorist organisation in April last year. The Pentagon statement accused the Quds force of being responsible for the deaths of hundreds of US service members and the wounding of thousands more.

Many consider Suleimani to have been the second most powerful person in Iran, behind Khamenei, and arguably ahead of Rouhani. Through a mix of security operations and diplomatic coercion, he has been more responsible than anyone else for projecting Iran’s influence in the region. This has been

led in Iraq, but also by establishing a seemingly permanent military foothold in war-torn Syria, linking Tehran to the Mediterranean and a land border with Israel.

The assassination had followed a tit-for-tat series of strikes by the US and Iran, protagonists in Iraq since late 2006. Suleimani had been central to almost all that Iran did and senior officials under Barack Obama considered him close to untouchable.

The strike came at a time when Iraq was already on the brink of an all-out proxy war, and hours after a two-day siege of the US embassy in Baghdad by a mob of PMF militants and their supporters. The Pentagon accused Suleimani of having masterminded the mob attack.

That siege followed US airstrikes on camps run by a PMF-affiliated militia particularly closely aligned with Tehran, which in turn was a reprisal for that militia’s killing of a US contractor in an attack on an Iraqi army base on Friday.

The US has deployed 750 airborne troops to Kuwait as a rapid reaction force available for use in Iraq, and officials have said up to 3,000 could be sent in the coming days. The defence secretary, Mark Esper, said on Thursday that more militia attacks were expected and the US reserved the right to take pre-emptive action to stop them.

indications out there that they may be planning additional attacks,” Esper said. “If we get word of attacks, we will take pre-emptive action as well to protect American forces, protect American lives. The game has changed.”

After the targeted killing, the US secretary of state, Mike Pompeo, posted a video he said showed Iraqis dancing in the street “thankful that General Suleimani is no more”.

However, Suleimani’s death leaves Iraq and the region on the brink of a new upsurge in violence, with Trump’s and Khamenei’s moves and counter-moves hard to predict.

Trump authorised the strike at a time when the US Congress was in recess, and the White House framed the action as an act of self-defence in the context of counter-terrorism operations. But Democrats and perhaps some Republicans in Congress will see it as an usurpation of the legislature’s authority to decide matters of war and peace.

“One reason we don’t generally assassinate foreign political officials is the belief that such action will get more, not less, Americans killed,” Democratic senator Chris Murphy said on Twitter. “That should be our real, pressing and grave worry tonight.”

Nigerian VLogger, Ronke Raji, is trending on Twitter because she and her husband are expecting their second child months after they welcomed their first