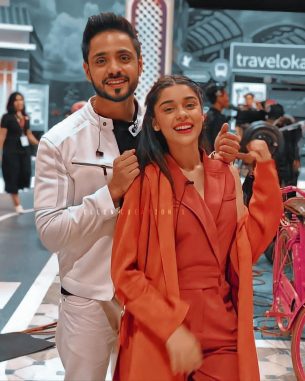 Zara’s Nikah Update 5 April 2021: Sartaj tells Zara that you destroyed my brothers’ lives. I will destroy your life now. Zara is about to call Kabir but he throws her phone out of the car.

Kabir says to himself that I didn’t talk to Zara today. He comes to Shahbaz’s room and doesn’t find her there.

Ruksaar and Zeenat are celebrating. Kabir comes there and asks where is Zara? My phone is off too. He calls her from Zeenat’s phone but her phone is off too. Zeenat says she seemed worried earlier. Kabir thinks if she went her home? Kabir calls Irfan and asks if Zara is there? Irfan says Zara is at your house? Where is she? Kabir says don’t worry, she must be on her way. Irfan says you let her go at night? Salma takes the call and asks where is our Zara? Kabir says I won’t let anything happen to Zara, don’t worry.

Irfan comes to Kabir and says you promised to protect Zara then why did you let her go? I was worried about Zara against this Ruksaar then why are you protecting her and letting her stay here? The servant comes there and says Zara called me and said that Irfan had an accident. She said that she got a call and her father is in the hospital, she left hurriedly. Salma says if this Ruksaar is behind all this.. Zeenat says enough, my sister was in pain last night. Kabir says enough, he thinks who must have called Zara?

Ruksaar comes to Shahbaz and says you know all my enemies are going to die, we will see how he leaves you here to go and save Zara. She makes him drink water and start leaving his room. She sees Kabir and others coming to his room so she hides and leaves. Kabir comes to Shahbaz and sees him panicking. He shouts at his servant that why did you leave him alone? Irfan tells Kabir that if you were not with Ruksaar the whole night then this wouldn’t have happened and Zara is still missing.

Scene 2
The guard tells Kabir that Zara was worried when she was leaving. They see the CCTV of Zara talking to the servant and leaving the house. A cab took her and went away. Kabir asks him to note the car number and search. They see that the car number plate is fake. Kabir says it means someone lied to Zara to make her sit in the car and take her away. But who would have done it?

Sartaj points the gun at Zara. Zara says don’t show me the gun by thinking that I will get scared, God will protect me and Kabir’s love will secure me. You would have killed me before if you wanted to, I am not moving from this car. Sartaj laughs and says if you don’t get out of the car then I will kill Kabir. Zara thinks that I can’t put Kabir’s life in danger and I have to get off the car to leave from here. She comes out of the car. Sartaj says there are no rules here so we will get married easily here. Zara says you want to me fear you? He says no, we wll get married and go to Singapore forever.

Scene 3
Kabir comes to the police station. Irfan comes there and says Shahbaz is with Salma. Kabir gets a call and comes out of the police station. A man is talking on the call that some goons broke everything in the shop and said that their boss is going to marry the girl he kidnapped. Kabir hears it and asks him to give details.

Sartaj tells Zara that Kabir is not coming to save you. You gave pain to my brothers but now I will give you that pain. Zara starts to run, he fires behind her. Zara grabs him and says what happened with your brothers will happen with you. You can never come in between me and Kabir. He grabs her. Zara says when Kabir comes there then he won’t let you misbehave with me. Sartaj pulls her closer.

Kabir sees the CCTV footage of the shop where some goons came and stole some wedding clothes. Kabir notes the car number and Imran finds the house number of the car owner.

Scene 1
Sartaj shouts at his goons for tying Zara to the chair. He says sorry to Zara and says I will open it for you. Some girls bring haldi there. Zara throws it away. Sartaj says I like this style of yours. He says force her if she doesn’t comply. Zara says you can’t make me say Qubool hai to you, Kabir will do what he did with your brother. Sartaj gets angry and asks his workers to work on her.

Kabir tells the woman whose car was used in the robbery. Kabir says I will help you but you have to tell me everything. She says I don’t know anything. Kabir says if you let God help you then he will protect you too. The woman calls her husband and says come here fast, your mother has a heart attack.

Sartaj brings the bridal dresses for Zara and says you can choose the one you like.

The goon comes to his house so Kabir grabs him and beats him. He shouts at his wife for lying to him. Kabir beats him and asks whose marriage is happening? He shows him Zara’s picture. The man says she is getting married and you can’t save her. Kabir is stunned.

Scene 2
Zara is locked in the room. A goon brings jewelry and asks her to wear what she likes. She throws it away.

Kabir calls the SP and tells him that this goon’s boss’s name is Sartaj. SP calls and says we need the force at some venue. The goon says if we do something there then Sartaj might hurt Zara. The SP tells Kabir that you go there and my men will be there as civilians.

Zara is trying to leave the house she is locked in. She hides from the goons and comes to the porch. She sees some women there and says you all are women, please help me. The woman says let’s go with us. They cover her face and bring her to a room. The woman says you are safe now. Sartaj comes there and smirks. He tells Zara that you are so beautiful and going to be my wife soon. He asks to bring the priest fast. He tells her that I can call your parents here too, we would like some parents here.

Scene 3
Salma asks Shahbaz to pray for Zara. I will forgive you if she comes back fast. A goon comes there and points a gun at Irfan’s head.

Kabir is disguised as an old man. He tells Imran and other officers that you all are going to be a witness in the wedding. Sartaj can’t know that we are there to stop it. A man tells Kabir that he needs a nikah nama in the English, he doesn’t know Urdu. Kabir says I will use that to my advantage and save my Zara. He recalls his moments with Zara, judaiyan plays.

Zara tells Sartaj that I am never marrying you, I got saved from death because of Kabir’s love, he doesn’t like someone looking at me but you have touched me so he won’t spare you. She thinks I am sure Kabir will come to save me. She recalls their moments too and smiles. Sartaj tells her I will show you a video, I have my men here all around and if he tries to come here then he will be dead. Your parents are under my house arrest too.

Kabir calls the SP and says I will message you when it’s safe for Zara. Kabir and others come to the wedding. The goon introduces them as priests. Kabir sees Zara coming there dressed as a bride. Tere sang plays as he looks at her and thinks to look at me and see it’s your Kabir. Zara looks at him but doesn’t recognize it.